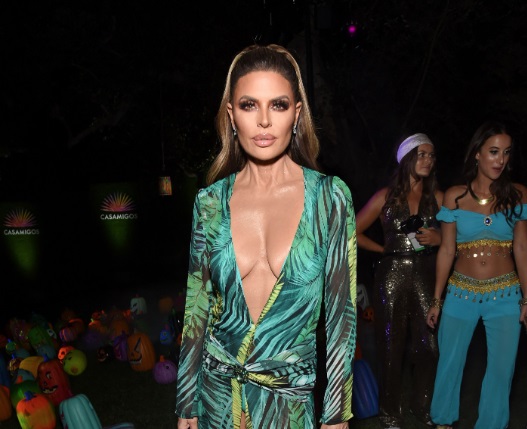 Lisa Rinna was serving face and bawdy at Casamigos’ annual Halloween party in Beverly Hills on Friday night. For the star-studded affair, the 56-year-old reality TV personality channeled none other than Jennifer Lopez.

That’s right, Rinna slipped into a vibrant green tropical dress that featured long sleeves, a plunging neckline and extremely thigh-high slit. The Bravo star’s risqué ensemble was certainly a tribute to J.Lo’s iconic Versace design that she wore to the 2000 Grammy Awards.

Making her Halloween costume even more spot-on, the Real Housewives star styled her hair with soft waves in a half-up ‘do. She also had that “J.Lo glow” as she donned a bronze contour, smoky eye, nude lipstick and champagne-colored highlight. She completed her lewk with gold strappy heels, dainty earrings and a body luminizer.

“Jenny from the Block,” the actress captioned her Instagram Story, alongside a fiery pic of her costume. Another post read, “I love Halloween.”

This isn’t the first time in recent years Rinna has dressed up as a celebrity icon. Last year, the 56-year-old actress went as her fellow friend and co-star, Erika Jayne.

“I LOVE YOU!! AMAZING!!,” the self-dubbed Pretty Mess wrote in response to her gal pal’s costume.

Just last month, Jennifer’s iconic green dress made a comeback in pop culture after she closed the Versace runway show during Milan Fashion Week. While there, the “Medicine” singer slipped into a re-imagined version that was adorned with lavish beads and more cut-outs.