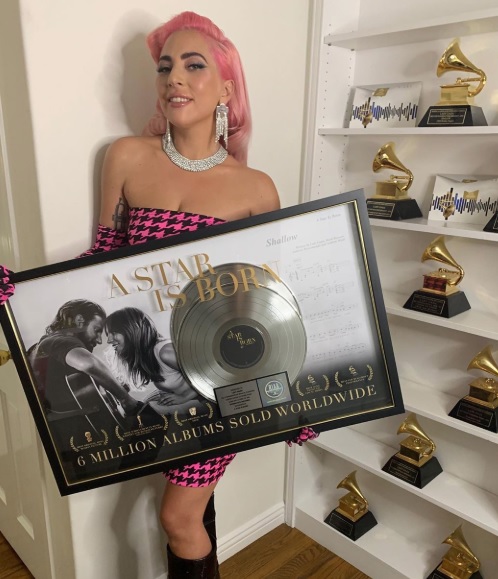 Lady Gaga is showing off her latest accomplishment with some new hair. The singer/actress posted a photo of herself with a plaque honoring the multi-platinum status of the Star Is Born soundtrack, all while showing off her brand new pink hair. Gaga winked at her new hue in the caption writing, “A year ago, A Star was Born, and here we are 6 times pink platinum.”

Her longtime hairstylist, Frederic Aspiras, commented on the photo with pink hearts.

Earlier this year, Aspiras spoke about working with Gaga and her ever-changing style.

“She can really let you believe that this is who she is,” Aspiras told Allure. “That’s why she’s such an amazing chameleon. But her purest form is when she is in her ripped-up fishnets, boots, and leather jacket — or a gown — and when her iconic silver-blonde hair is messy or she has a wig on. We live and breathe our art, and that’s what keeps us inspired. It’s not a costume per se. It’s what we love to do.”

While she was busy promoting the film last year, Gaga took on an old-Hollywood style while also adding her own twist to the classic looks. In an interview with WWD during the press tour, he discussed how the two were able to approach the new challenge.