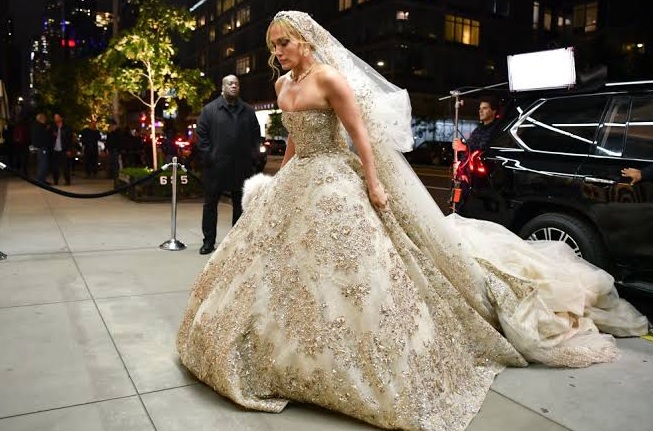 Here comes the bride — well, not in the way you may be thinking!

Jennifer Lopez stepped out in New York City on October 17 in an over-the-top, bedazzled wedding dress while filming her upcoming flick “Marry Me”.

The dress, which arguably shone brighter than all of Times Square, was a cream-colored ball gown embroidered with gold and silver embellishments.

Lopez paired the gown with a matching sparkling veil and impressive choker necklace.

Though there is no set release date for the film quite yet, Variety reported details about the plot.

“Marry Me” will be about a pop star who is set to take the stage at Madison Square Garden to marry her fiancé (played by Maluma) but finds out he has been having an affair just moments before the wedding is set to take place, causing the pop star (Lopez) to have a very public on-stage meltdown and then pick a random audience member (Owen Wilson) to marry her instead.

Though not much else is known about the film outside of the bare bones, Maluma and Lopez have been active on Instagram posting photos of rehearsals and filming.

As for her own future nuptials to Alex Rodriguez, Lopez told Entertainment Tonight last month that the couple has been “talking about it, but we don’t have any firm plans… and we’re talking about a lot of places [to get married in], but I don’t know yet.”