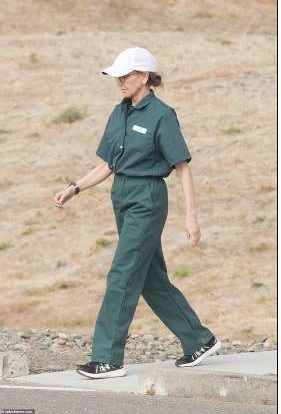 Felicity Huffman was spotted wearing her green jumpsuit during Saturday’s family visiting day at California’s FCI Dublin, as she walked outside to greet her husband, William H. Macy, and daughter, Sophia, who had gone to the prison to see her.

New pictures show Huffman wearing a dark green two-piece prison uniform, with her hair tucked up under a white hat, as she exits the prison alone to meet up with family who had traveled to Dublin, California, see her.

Huffman, who was smiling and did not seem to be accompanied by any guards, completed her outfit with black and white Under Armour sneakers, a black wristwatch and glasses.

Huffman reported to the Federal Correctional Institution – the minimum-security women’s prison known to locals as ‘Club Fed’ – in Dublin, California, on Tuesday.

She got caught up in the college admissions scandal after she was found to have paid admissions consultant Rick Singer $15,000 to forge SAT answers for her now 19-year-old daughter, Sophia.