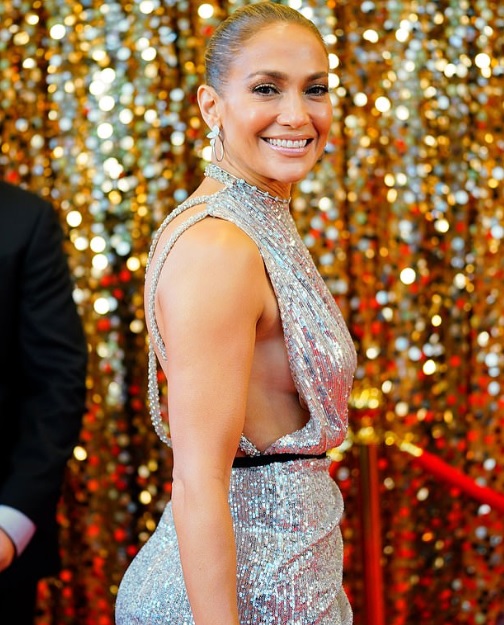 Art imitated life on the New York set of the film Marry Me this Tuesday.

Jennifer Lopez, Owen Wilson and Maluma were shooting a scene in a setting they all have plenty of real-world experience with – a red carpet.

The 50-year-old Jenny From The Block singer, in character as a pop diva, wore just the sort of dazzling gown she models on actual red carpets.

She went braless in a silver split dress that emphasized her legendary curves and allowed her to show off her dancer’s legs.

Giving herself a bit of extra stature on a pair of sky-high heels, the Selena star accentuated her screen siren features with striking makeup.

As on real red carpets, Jennifer flashed a megawatt smile as she emerged from her car and a gentleman in a suit helped her onto the curb.

J-Lo slicked her hair tightly back into a bun and could be spotted between takes with a robe flung over her shoulders and a coffee cup in her hands.

Her sparkling ensemble featured a cape that draped over her left arm and was trimmed with a faint bit of fringe.

8 Dark Lipstick Shades and How to Wear Them This Fall