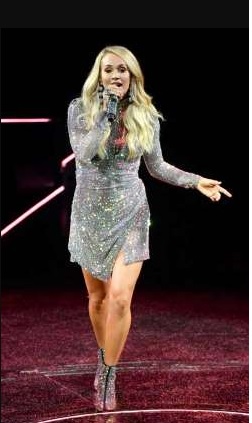 During the superstar’s Tulsa, Oklahoma concert on Thursday night, fans were treated to a special surprise by none other than Carole Underwood, who joined her daughter on stage during an electric performance of “The Champion.” And, Carole proved that Carrie isn’t the only Underwood with pipes: She epically performed the rap portion of the track, originally sung by Ludacris. And, needless to say, she rocked the house. Even the crowd was up on their feet, cheering her on.

Of course, Carrie was also impressed. “Got to share the stage with this amazing champion tonight!” she wrote. “Of course, I’m talking about my mom! She crushed it!”

Later, the American Idol alum shared the sweet video on Instagram. “Nailed it!” Carrie raved to her 9 million followers. “I kept trying to keep her on track! At the end she said ‘Did I do OK?’ Who knew Mom could rap?!”

Carrie’s “Cry Pretty” Tour has become quite the family affair.

Beside Carole’s role as backup rapper, the superstar mom has also given her 4-year-old Isaiah an important task.

“Somebody recently called him ‘The Mayor of Catering’ because he’s just like, ‘Hi, everybody!’ and loves seeing everyone,” Carrie told Steven Colbert during a visit on The Late Show. “He’s got his little scooter he rides around the venues in. He’s such a people guy. So he’s living the dream.”